Over the past couple of months I had the great opportunity of taking part in this year’s Google Summer of Code. I moved out to bring Ubuntu One to the KDE desktop and I think I was rather successful with it, now all I need to do is find someone who is willing to maintain it … 😉 Now that Google Summer of Code is over I will continue focusing my efforts on Kubuntu and general distribution development which is the reason I would very much like to find someone who is willing to maintain it.

But first let me outline what exactly you can expect from this first iteration of an Ubuntu One client.

It basically consists of a couple of libraries that allow fast creation and enhancement of client applications of any kind. In fact I suppose most of the code was produced as either a library or in a form that could become part of a library. I will blog about the underlying technology in a bit. Based on those super useful beasties I created also some user visible applications that cover basic use of Ubuntu One on the local desktop.

The foremost component is the Ubuntu One Status Notifier (posh name for tray icon). As one would expect from a thing that calls itself status notifier, it notifies about the status of your Ubuntu One client. In particular it will show you whether you are connected to the Ubuntu One server and in general what exactly is going on with your client, for example it also shows when a download or upload is occuring and which files are currently being processed. In addition to the status notifications it also is a sort of starting point for general things you might want to do with your Ubuntu One client. For that it provides 3 key capabilities:

Talking about configurations. Ubuntu One also embeds in System Settings’ network area. Using these awesome configuration modules you can not only get information about your space usage and Ubuntu One subscription data but also configure maximum bandwith usage or whether the Status Notifier should autostart. Of course you can also look at your shares and mange which folders ought to be synchronized with Ubuntu One. 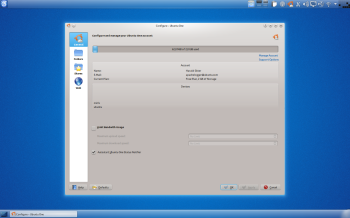 To drive ubiquity one step further -> Ubuntu One is also in your KInfoCenter 😉 As a side product of the regular configuration modules Ubuntu One also provides information in your KInfoCenter, which is of course the most natural place to provide information in. Thanks to the supreme design of the KDE platform doing such things is super easy and takes very little effort. 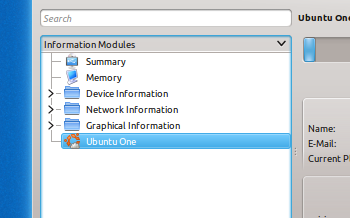 There are also some less polished components (that I do not want to talk about right now ;)). I think this is a very good starting point and much greatness can be created based on what is here. All it takes is someone to step up and take on maintainership and care for the code and improve it and polish it and make it a diamond.

Update: development on my end is done, please refer to the Launchpad bug report for UbuntuOne-KDE for status updates.

Should you have questions, suggestions or maybe even want to join development please join the Kubuntu development mailing list or ping me on IRC.